In this series of articles -Dundee Architecture – we will look lightheartedly at the best and the worst of architecture in Dundee.

Its long overdue, but at the same time a joy to see lots of building of historical and architectural importance being resurrected to play a role in society again.

This is a series that we at John Webster Architecture have decided to roll out to celebrate the renaissance that is taking place in Dundee right now. Things are moving fast!

There are lots of new fantastic buildings popping up, V & A, of course, being the flagship building (that people love to hate), but in my opinion, they will sit so well amongst the restored existing buildings.

Not everyone likes what is happening and there are lots of different opinions flying around, but you can’t please everyone, that’s just life.

We will publish several articles to look at the best and worst of Architecture in Dundee.

Dundee certainly has the potential to be a ‘player’ in terms of bringing revenue to the city through tourism, creating jobs and wealth for the city.

Dundee is located in such a privileged location on the banks of the Tay and has the esteemed title of being the sunniest city in Scotland, Scotland’s fourth largest city enjoys around 1426 hours of sunshine per year:)

Who wouldn’t want to live here!!

Anyway, enough of bigging Dundee up and back to the Architecture.

I think we as Dundonians have become a bit blind over the years to the magnificent buildings that have been staring us in the face, buildings that now in 2018 Dundee Architects would not dare to design, not that they couldn’t design them but due to the prohibitive cost of building these type of buildings.

So since we are lucky enough to have such a rich Architectural heritage in Dundee, let’s just sit back and enjoy it.

Some of Dundee’s amazing Architecture

Lets dive in a get started, this blog post will look at two buildings that have, at considerable expense been revived to show what they once were, the way the architects had designed them. 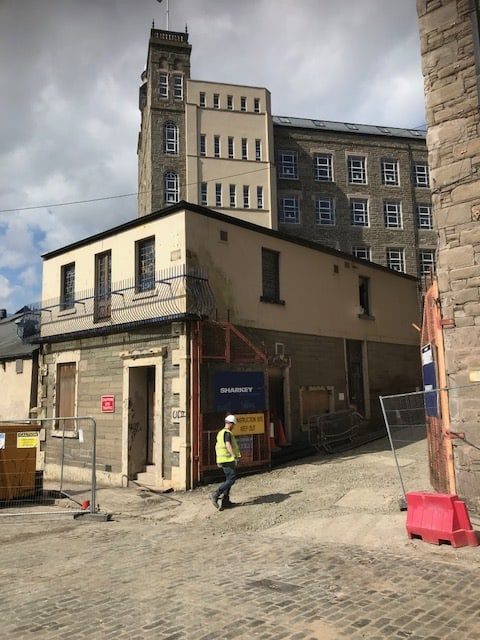 Peter Carmichael was accredited as being the Architect for Lower Dens Mills but he was, in fact, a Mill Engineer, nice job Peter!

You can read a bit more about Peter Carmichael here

Heres some information you might find interesting courtesy of Building at risk registry for Scotland.

One of four fireproof flax mills of the former Baxter Brothers’ works, grouped around a courtyard. The Bell Mill at St Roques Lane is by Peter Carmichael and dates to 1866. It is on 5 storeys with attic, its façade rubble-built around an iron frame construction. The 4 bay south elevation features projecting Italian Renaissance towers with roundheaded windows. The west tower is topped by a square cupola with 2 arched openings to each face, segmental pediments, a domed drum, and cross finial. The east tower houses the hoist and is topped by a flagpole. An oculus sits in the gablehead between. The east and west elevations run to 12 bays and feature ashlar triple-arched passageways that traverse the mill at ground floor level. The 3 bay north elevation is mansard gabled and topped by urn finials.

The earliest Baxter mills were built here in 1822 and 1826, replaced in 1865-6. (Historic Environment Scotland List Entry)

Dundee has no finer Victorian symbol than the Dens Mills, once the empire of the mighty Baxter brothers who, between 1840-90, rose to be the world’s first linen manufacturers. Lower Dens was built from Baxter’s own foundry, consisting of four fireproof flax mills: Bell, North, Dens and St Roque’s. (C.McKean & D.Walker) 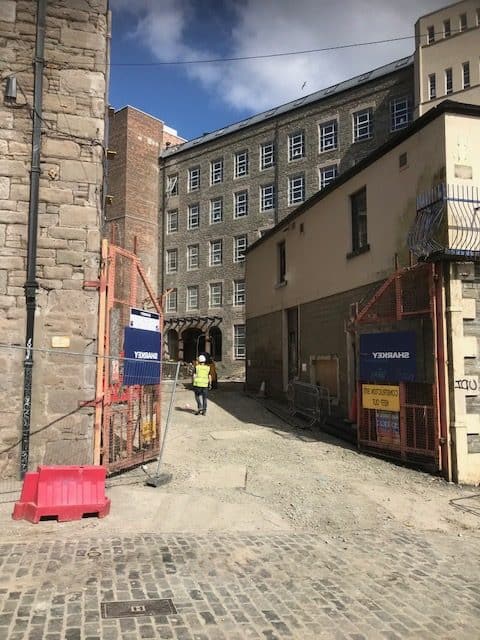 In more recent times this building has been subject to two different planning applications that ultimately failed to materialize, probably due to cost.

In 2009 aPlanning Approval was given for 99 flats….surely they could have managed 100:)

And in between 2009 and now a 3-star hotel which also failed to happen, but as you can see from the photos work is well underway and due for completion October 2018. 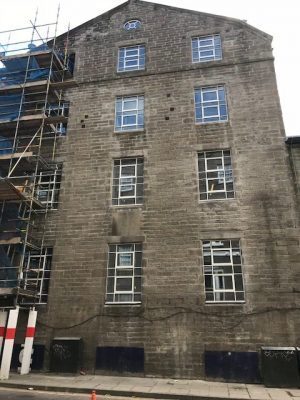 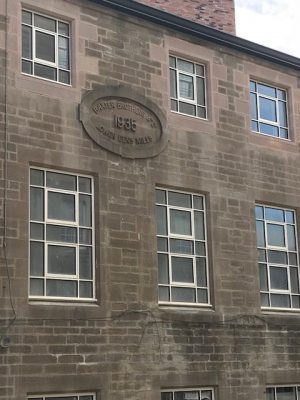 Dundee Evening Telegraph wrote an article in July 2017 describing what was in store:

“The project, taking place in partnership with InterContinental Hotels Group (IHG) and developers Percor Capital, will aim to restore the architectural legacy of the buildings, including one of the bell towers that was modeled on the Santa Maria Della Salute in Venice, with the developers working closely with Historic Scotland.

They will be part of the Dundee waterfront regeneration initiative, headed by the V&A Museum of Design, to help boost the city’s economic revival.

The boutique Hotel Indigo will provide a mixture of standard and executive rooms and suites, with large beds, bathrooms with underfloor heating, smart TVs, and fully air-conditioned rooms.

Many of the hotel’s public areas will highlight the site’s former use as a significant jute mill, while also paying homage to some other key themes Dundee is famed for; marmalade, games, fresh produce and the Press.

A games section will be available for guests to enjoy along with a cozy meeting area called ‘The Den’, a fully-equipped gym, a bar, and restaurant.

Staybridge Suites will mainly cater for extended-stay guests, offering a range of serviced studios and one-bedroom apartments with full kitchen facilities, including a fridge, oven, and dishwasher, as well as large desks and strong Wi-Fi coverage.

There will also be a breakfast area, a small retail complex, a spacious lounge, a laundry room and a meeting area”

Really looking forward to seeing this completed in an area that has largely been ‘forgotten’…..might even pop in for a drink! 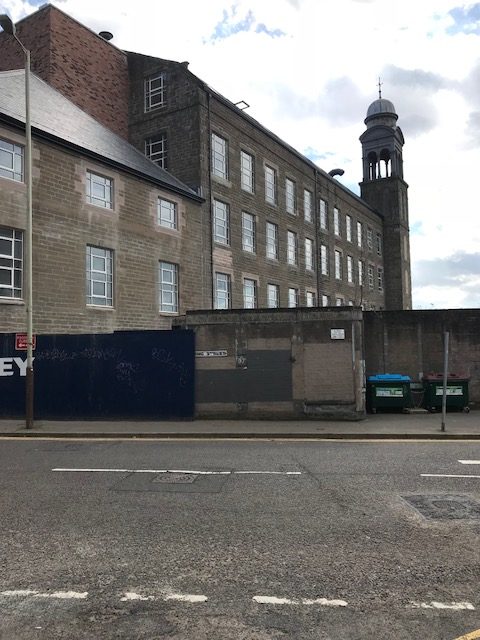 Fantastic view of the bell tower 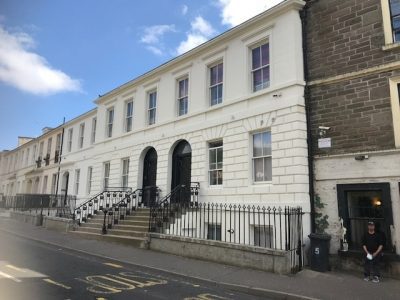 Not too far down the road from Lower Dens Works, these properties at 5-11 King street Dundee will be instantly recognizable as Sinatras Pub, a Dundee landmark in the 1980’s.

Anyone over 45 has probably enjoyed a night out here at some point:)

Sinatra’s bar, on King Street, was a popular haunt for almost three decades. The venue closed in 2011 and plans were approved in 2016 to turn it into 12 high-end flats.

Sinatra’s was opened by Ian Hindmarch, a motor trader, and at one point was one of the biggest pubs in Dundee. 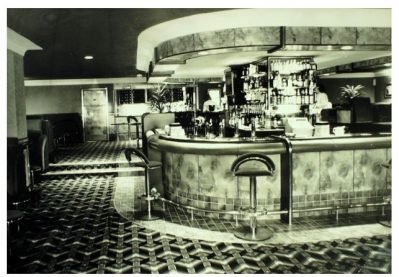 Inside of Sinatras pub Dundee 1981

These category B listed buildings have now been extensively refurbished and developed into Luxury flats – Architectural excellence! 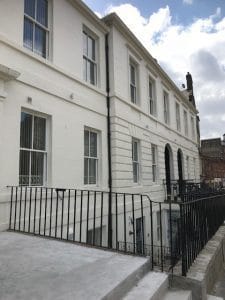 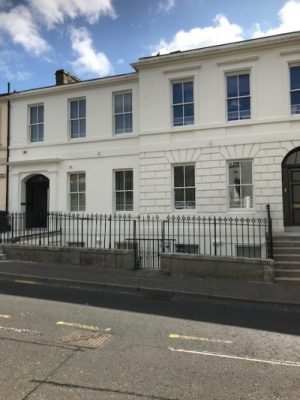 Next time we will look at another 2 buildings that have massively aided with the regeneration of Dundee and continue to put Dundee Architecture on the center stage.

How about the worst of Dundee Architecture? 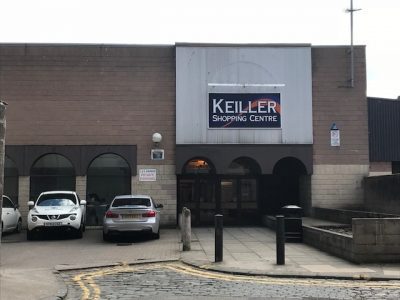 Could the Keiller Centre represent the worst piece of Architecture in Dundee? Maybe…

Built in 1979, it was a hive of activity back then but times have changed and its now probably time for it to go.

Who knows what the future holds for this site, but its got to be better than this….surely.

As Dundee steps up a gear we look forward to welcoming a new generation of Architecture to the city…exciting times for Dundee & Architecture.

Find lots more of what Dundee has to offer here

If you are ready to move ahead with your project or just need some advice, call me on 01382 792131 or drop me an email john@jwarch.co.uk

Find out how much we charge here